We all know the song, especially the undeniably contagious “Five gold rings!” line, but how many people know that the Twelve Days of Christmas are also known as Christmastide (or Twelvetide) and begin on Christmas Day, not (as the commercial calendar would have you believe) on the 14th December?

The Twelve Days of Christmas are celebrated in different fashions the world over. In Eastern Christianity, the Great Feast of Theophany (Epiphany) on 6 January is considered a higher-ranked feast than the Nativity (Christmas), and commemorates the Baptism of Jesus rather than the arrival of the Magi. Whereas in Western Christianity, each day following Christmas Day is a feast in memory of a Saint or event associated with the Christmas season.

In contemporary times, many in the UK still celebrate aspects of the Twelve Days of Christmas, whereas in the US, the traditions have been largely forgotten, replaced by more secular traditions and the ever-popular New Years Eve celebrations.

To celebrate this auspicious time, I’ve decided to begin something which I hope will become an annual tradition; the Twelve Days of Christmas Blog Challenge! A challenge that will see reflections on the year just gone and anticipations of the (no doubt) glorious year ahead!

This year marks the inaugural appearance of this challenge and it will commence on the 25th December. As with all blog challenges, it would be magnificent if other people played along (unless you’re all too busy munching on mince pies) so feel free to do so at your leisure! :)

The prompts, should you wish to play along, are outlined below and can be interpreted however you wish: 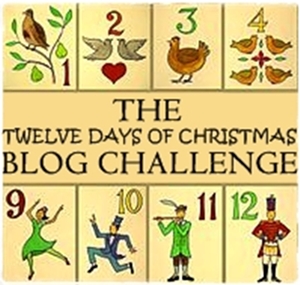 Day 01 – 25th December – 1 Thing you got for Christmas
It might be something you got this year, last year or perhaps a favourite present from Christmases past!

Day 02 – 26th December – 2 Foods you can’t get through Christmas without
Are you a stickler for a traditional roast or do you favour a more eclectic array of food?

Day 03 – 27th December – 3 Favourite songs of 2013
I don’t know the actual figures but surely there have been tens of thousands of songs released over the last twelve months…so picking a mere three of them should be pretty simple. Or at least you’d think it would be!

Day 04 – 28th December – 4 Favourite movies (or TV Shows) of 2013
Are you a Game of Thrones fiend or an Iron Man aficionado? Now’s the time to share your pick of the entertainment industry’s output of the last twelve months.

Day 05 – 29th December – 5 Life lessons you learnt in 2013
Whether we realise it or not, we all learn something new every single day of our lives. So what have you learned in the year just gone?

Day 06 – 30th December – 6 Regrets from 2013
Today’s prompt is not about looking back with negativity, it is about identifying where we went wrong so we can take a more positive route in the future.

Day 07 – 31st December – 7 Wonderful things that happened in 2013
How many awesome things happened to you during the last twelve months? Surely picking just seven should be a piece of cake! :)

Day 09 – 2nd January – 9 Places you’d like to visit in 2014
Take a moment in this hectic period to forget about your credit card statement and financial situation. If money were no object – where would you like to visit during the oncoming year?

Day 10 – 3rd January – 10 Books you’d like to read in 2014
Maybe you’re itching to read an upcoming release or catch up on some literary classics, whatever books you’re looking forward to reading, why not share them so others can add them to their list of books to read next year?

Day 11 – 4th January – 11 Memories from Christmastide throughout your life
This time of year is often seen as one of reflection, so why not spend a few moments reflecting on your life so far and share eleven memories that occurred at some point during the various twelve days of Christmas you’ve lived through so far.

So there we have it, twelve (relatively) simple prompts to keep yourself (and others) entertained throughout the Christmas and New Year period. If you do decide to play along, please remember to link up via the comments field so I can keep people abreast of all the magnificent answers that are floating around in cyber-space.

I for one am looking forward to embarking on this challenge…probably more so than the big day itself!