My sixth day in Melbourne was a day of two halves. Half of it was pure bliss straight out of the bottle. Half of it was a nightmare of anxiety and PTSD. But it is still a day I will look back on with fond memories.

Half One: Pure bliss straight out of bottle…

The day began like all my others in Melbourne; leaping out of bed, throwing myself into the shower, quickly dressing so as not to see my naked self in the plethora of mirrors and then hurtling out the door to commence another day of adventure and excitement in my favourite Australian city. On the cards today was a visit to the Melbourne Sea Life Aquarium and I couldn’t wait! Sitting in Federation Square waiting for the Aquarium to open was pure hell. Why didn’t it open sooner? Why had I left the motel so early? To pass the time I ended up treating myself to a cheapo cooked breakfast in a cafe I discovered whilst homeless – $7.50 for bacon and eggs, bargain – before meandering slowly toward to the Aquarium hoping it would open early just for me. Alas, it didn’t, but I only had to wait ten minutes or so before they opened their doors.

The only downside of going to the Aquarium is the price. For some inexplicable reason they have decided that the optimum price for adult admission is $38 which, even though you’ll be spending plenty of time admiring the cute liddle fishes, is somewhat extortionate. Especially for someone like me, who lives in abject poverty on a daily basis. But I stoked up the cash (Meadhbh would never have forgiven me if I hadn’t) and headed into the dimly lit building to begin the tour.

First installation was a huge tank full of grumpy looking giant fish and perky looking tiny fish. Perhaps the giant fish were so grumpy because they couldn’t swim as fast as the little fish, Meadhbh chimed in, before shrilly shrieking in my ear as she saw the next set of exhibits were crabs. We spent nearly fifteen minutes examining these crustaceans of all sizes, colours and shapes. Big crabs sat motionless in their aquatic wasteland, whilst tiny crabs scuttled across the sand of their domain in a hedonistic state of excitement. Why are all the big animals so still and un-entertaining, Meadhbh asked. I didn’t know. Perhaps they were tired. Perhaps they were biding their time to break out into a spontaneous dance number when no-one was watching. 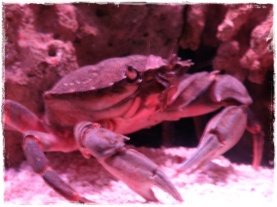 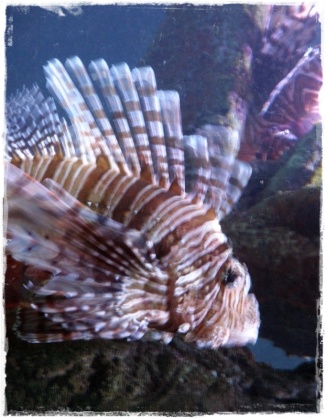 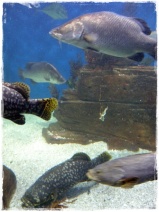 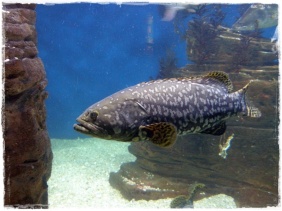 Part of the giant shark tank!

From the crabs we took in starfish, coral reefs and numerous tanks filled with all sorts of bright, iridescent fishes. There was, of course, tanks full of Nemos and Dorys for the Finding Nemo obsessed kiddies and tanks full of jellyfish for the Ooo, dangerous obsessed adults. I loved the jellyfish. Watching them slowly power themselves through the water was hypnotizing and had a delightful calming effect on me.

Next up was the giant tank filled with sharks, manta rays, sting rays and all manner of strange-looking fish I couldn’t identify. Then was the turn of the Aquarium’s new star attraction; a giant salt water crocodile, who lay motionless on the floor of his enclosure, no doubt biding his time for when he can break out and munch down on all the kiddies that squeal and oooo in his general direction.

Then came the surprise. For some reason the head-honchos at Melbourne Aquarium have decided that lizards are now considered amphibious animals, so we were thrilled by blue tongued lizards, snakes and the graceful awesomeness of the Shingleback (Sleepy) Lizard, who is my personal favourite of the reptile kingdom. There were also spiders; and the only reason these have been included in an aquarium is to freak out arachnophobic individuals such as myself. 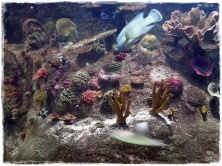 The final exhibit was Meadhbh’s favourite. In fact, she was so excited she was unable to speak properly. Her usually eloquent and considered words replaced with shrieks, squees and strange, indecipherable, high-pitched noises. For Melbourne Aquarium, unlike on our last visit in 2007, now has a penguin exhibit. A large, ice ridden enclosure filled with Emperor Penguins who stood around looking regal and awesome. Like Meadhbh, I love penguins, and relished the opportunity to get up close and personal with these magnificent creatures. We spent a good twenty minutes just staring at the birds through the glass, watching them waddle around, swim in their personal pool and just be magnificent. Meadhbh also loved watching the children who were pressed up against the glass trying to get the penguins attention; waving and jabbering incomprehensible excited child noises.

All in all, although the $38 is too expensive a price, we relished our time at the Aquarium. Meadhbh loved it. I loved it. Easily one of the highlights of our trip; especially because of the Shingleback lizards and Emperor Penguins.

Half Two: A Nightmare of Anxiety and PTSD

Alas, the excitement of the morning’s escapade to the Aquarium did not extend into the afternoon. For the first time since I’d arrived in Melbourne I began to feel overwhelmed with anxiety. I was tired. I was exhausted. And I began to freak out at the sheer number of people who were around me. This increase in my anxiety led to my PTSD beginning to flare up, and I found myself overwhelmed with memories of my brutal homelessness and of the abusive relationship that destroyed my life. I didn’t know what to do. I didn’t know how to control the growing malaise that had overpowered me. So I sat for a while in Federation Square, taking (somewhat dodgy) photos of the architecture and maintaining a conversation with myself, and the ghost of my abuser, which drew strange looks from passers-by as they wondered why this strange, overweight man was talking to himself.

Textures of Federation Square (I) 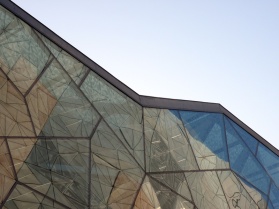 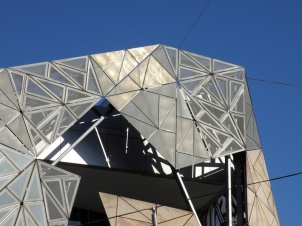 As the PTSD symptoms began to overwhelm me I knew I needed to do something. I was starting to feel as isolated, ostracised and judged as when I was homeless. My conversation was drawing not only strange looks but also muttered comment and this attention just made me feel worse. It increased my anxiety and, in that cruel, vicious cycle, increased my PTSD symptoms. So I packed up my camera and took myself to a place I knew would ease my troubled soul; the NGV International. It would be the third time I had visited this magnificent attraction since being in Melbourne but I didn’t care. It was free. It was calming. It was exactly what I needed. 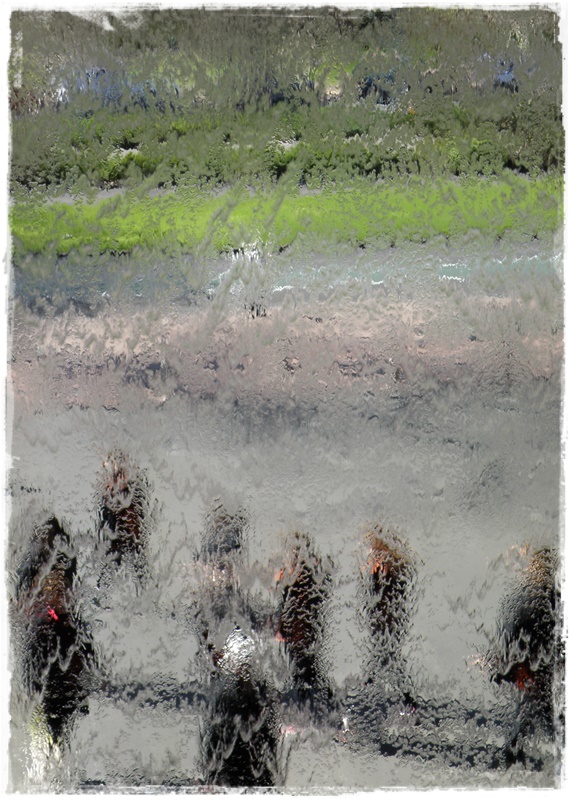 Within an hour of being amidst the beautiful artwork displayed my anxiety was easing. I was having fewer PTSD symptoms and the conversations with the ghost of my abuser were diminishing. By the time I left the building and sat on the wall out the front for a medicinal cigarette, I was feeling in control again, so I smoked my cigarette and then walked back into the city for a spot of window shopping and my daily canister of Irn Bru.

By now the day had drawn to a close and dusk was settling over the city. The streetlights had come on and the neon signs that decorate the various intersections of the city were casting their alien glow across the city. I’ve always loved the city at night. During my homelessness I would spend many hours just drifting around the city, seeking out the shadows to hide in as I soaked up the energy and vibrancy of a city after dark. So this is what I did now. Just floated around, people watching, building watching, relishing in the excitement of a city come alive.

After a time I treated myself to Lord of the Fries, and their delicious French-Canadian topping, before deciding to wander back to the motel. Although I had managed to control my anxiety and PTSD, their appearance in the day had tired me, and I yearned to rest, to just lay back on the motel bed and lose myself to the world of sleep.

The next day would be my last in Melbourne, and I was slightly overcome with feelings of sadness and melancholy. I loved being in the city. I loved being in Melbourne. It felt right. It felt natural. I didn’t want to return to the stifling, suffocating world of Wodonga and all the mental health insanity that I knew would befall me there. So as I lay on the motel bed I vowed to make my final day in Melbourne something wonderful, something relaxing, something to remember during the monotonous, nightmare laden days ahead.