Federation Square (aka ‘the first photo I took in Melbourne‘) | © Addy

It’s been a week since I returned from my eight-day venture to Melbourne and I’m still struggling to find my feet. I’m not sure if it was the Hearing Voices Congress, being back in Melbourne or a combination of the two, but my energy levels have flatlined over the last several days. On both Saturday and Sunday I couldn’t rouse myself from bed until nearly midday – which is very uncharacteristic for me – and during the periods I’ve been awake I’ve been so unmotivated to do anything other than sleep that it’s starting to bug me.

So, in attempt to rouse myself from my unfocused stupor, I’ve decided to recant my time in Melbourne by sharing with you some (slightly edited) extracts from the journal I kept during my time there. Beginning with the day before I left:

Truth be told, I’m seriously freaking out about the whole Melbourne trip. I’m terrified of the train, uneasy about the accommodation and petrified of the World Hearing Voices Congress. I’m so used to being on my own that I’m not looking forward to sharing my space for three days. I’m anxious that my IBS will flare up. I’m stressed about being back in a city that did nothing but treat me like crap I’m fearful of bumping into old friends (and enemies) and what they may have to say. In fact, I’m starting to think it would be best all round if I just stayed at home and forgot the whole venture.

But knowing me, I’ll go through with it. If only to prove yet another thing to myself that no-one else really cares about.

(Note: after a diatribe concerning my IBS issues and the realisation that I really should speak to a GP about the whole thing I managed to get onto more important, and entertaining, issues!)

Also, in other news, I’m currently watching television for the first time since 2011. After a boring news update I stumbled upon a repeat of Doctor Who (series 7, Hide); not the greatest episode, I’ll grant you, but it is whetting my appetite for the upcoming celebrations! :)

Bored. Lonely. Lonelier than usual. Not sure why.

Off all the possible emotional states my trip to Melbourne would produce, the loneliness issue was something I wasn’t entirely prepared for. It would be something that would haunt me throughout the remainder of the week and the only explanation I have for it is to do with the memories of my life ‘pre-homeless’.

But whatever the cause, I knew I would have to deal with it. As I would my first ‘full day’ in Melbourne…

I am being seriously triggered by this shared accommodation. Ever since checking in at 5pm(ish) I’ve been sweating, monosyllabic, teary and nauseous. It is reminding me so much of the boarding houses I used to stay in. Not fun. In fact, at this moment, I fear my anxiety and stress over the accommodation will override any enjoyment of the congress! :(

To try to get my mind off the anxiety, how about I try to think about something else?

I didn’t do all that much today. After the ride from motel to Southern Cross, I meandered across the city to the NGV. Unfortunately, only a 1/3 of the galleries were open as they’re prepping a major new exhibit that opens on Friday. What irked me (and Audrey) was that McCubbin’s The Pioneer was not on display, thus disallowing us access to our favourite painting. I did however take several photos of other works to share on the blog at some point. 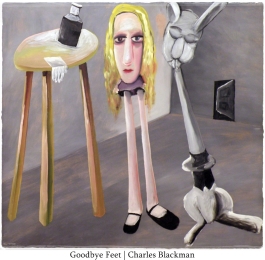 After the gallery, I floated around Melbourne’s shopping precinct before venturing to the NGV International (which was closed, irking Audrey even more) before revisiting my old “home” in the Kings Domain. Aside from minor aesthetic changes (the height of the fence, changes to the toilet block) it hasn’t changed all that much and I was overpowered by memories of darker, more traumatic times, that have remained with me for the rest of the day. No matter how hard I’ve tried to ground myself, I keep slipping back into those distressing “homeless Addy” days. All of which has been feeding into my present triggered state to create a wholly unpleasant sensation.

Because of this tsunami of stress, I didn’t do much after this walk down memory lane. Simply sat around Southern Cross waiting for the rest of the Gateway entourage to arrive. An action that – as should have been expected – fed into the resurfaced memories and served only to remind me even more of my homelessness; sitting, smoking, waiting, smoking, doing nothing, smoking, sitting…etc…actions that, again, further fed into my current malaise.

I’ve even considered blowing all my cash on a single room at the motel instead of this shared accommodation…something that is irking all my people as it would leave nothing for fun’n’games.

Speaking of games, one of the major bright spots of the day was pre-ordering my birthday present to myself, The Legend of Zelda: A Link Between Worlds, which is being released this coming Saturday. Months of saving up is only a few days away from paying off! :D

Other bright spots? Well, the only ones I can think of – however sexist and/or misogynistic it may be – has been the quality of women Melbourne has to offer. Whether it be international backpackers sporting cute dungarees or all-powerful business women rocking pencil skirts, it has most certainly been a feast for Shay’s senses (and imagination) today. One woman in particular – one of the all-powerful pencil skirt rocking variety – had the most spectacular posterior I have seen in years! And that includes all celebrities and naughty online websites. Seriously, this was a backside that made you feel glad to be alive! Which, in a day ruled by stress, anxiety and triggered states, is not all that bad a thing! :)

Tomorrow marks the beginning of the World Hearing Voices congress, and as it requires an early start, I think now would be a good time to sign off. Hopefully that parting memory will produce some equally spectacular dreams! :p

What happened during the World Hearing Voices Congress? Which – if any – of my voices became so feral I had to scold them in the middle of Collins Street? What exactly is a Warmbat Hat? And, most importantly, did I have any spectacular-posterior filled dreams?

For the answers to all these questions – and more – tune in tomorrow when Addy’s Adventures in Melbourne continues!

Since returning from Melbourne two days ago I’ve been feeling very much like the Koala Bear in the above photograph. My energy (and motivational) levels have been exceedingly low, to the point I’ve been unable to do anything other than sporadically fall asleep at random opportunities. I firmly believe the cause of this is simply because I’ve been running around the city of Melbourne for eight days, trying to squeeze every activity I could into this time frame (even if this meant coming at the cost of a good night’s sleep!)

Aside from the three-day World Hearing Voices Congress (which was exhausting enough in its own right), I explored the zoo with Meadhbh, extensively toured both art galleries with Audrey, attended a midnight opening for the release of the new Zelda game, cycled along the Yarra River several times, meandered around the exhibitions at the Australian Centre for the Moving Image, enjoyed some window shopping around the CBD, attended Sexpo with Shay, watched The Day of the Doctor four times  (including the early morning worldwide simulcast), and had approximately eight panic attacks a day courtesy of how hectic Melbourne has become over the last few years.

Of course, I will be writing more extensively about my adventures in Melbourne over the coming days, but for now I’m going to find a Eucalypt tree so I can practice my Koala impression a little more! :)

Hope everyone’s week has been a wonderful one! :)