“Spring drew on…and a greenness grew over those brown beds, which, freshening daily, suggested the thought that Hope traversed them at night, and left each morning brighter traces of her steps.”
~ Charlotte Brontë ~ 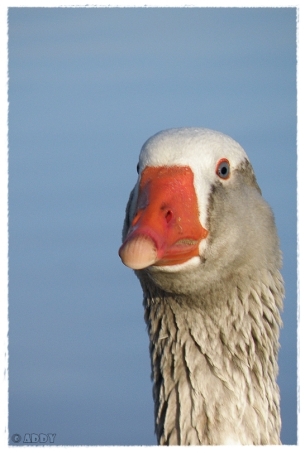 This week’s theme ‘Behind the Lens’ is a combination of photography and memory. Each day a random image will be plucked from my archive and – regardless of how good it is – showcased on the blog along with the story behind the image. Today, a personal favourite titled Punk Queen Pelican. 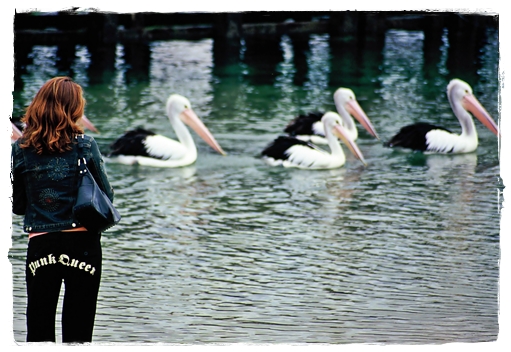 “King and Queen of the Pelicans we;
No other Birds so grand we see!
None but we have feet like fins!
With lovely leathery throats and chins!”
Edward Lear

In November 2004 my parents visited Australia for the first time. Having been down under for over two years, my then girlfriend and I put together a comprehensive program of events that would showcase as much of the country as we could. Given my mother’s love of penguins, a trip to Philip Island and their infamous penguin parade was a no brainer.

After two days of exploring Philip Island we were heading back to Melbourne when we came across a number of pelicans being fed. Although not as cute as penguins, there is something majestic about a pelican, so we pulled over to take a closer look.

It was whilst randomly snapping photos of the pelicans that I noticed the woman held in hypnotic rapture by the beautiful avians before her. Immediately my attention was drawn to her hair; the vibrant colours, the spectacular layers, the contrast against the subdued colours of the overcast day. In all honesty I think I wanted to photograph this more than the pelicans!

After lining up the shot, I waited for the pelicans to position themselves into the frame and fired off a few images.

As I was sans-digital at the time, the image was shot on slide film and then processed weeks later. It was only when I was studying each image in my flat did I notice the unfortunate positioning of a pelican’s beak which, given the text emblazoned across the woman’s posterior, gave the image its name for the rest of time.

A few articles to cure any pelican cravings: