Methinks, I’m gonna have to up my game!

In all honesty, the problem arose when I realised the storyline I’d planned to write was failing spectacularly. So during a difficult conversation I realised that if I stood any chance of completing this challenge I’d have to start from scratch.

The only thing to do was rip up all the plot notes I had and start afresh; new subplots were devised, a couple of new characters were thrown into the mix and a crazy idea (which I still haven’t decided if I’m going to use) came to me somewhere between the supermarket and home.

For a couple of days I mulled over these revised ideas until I finally convinced myself I could (possibly, maybe…have some faith in yourself man!) make it work – even though fiction writing has become completely foreign to me given it’s been years – not months – since I wrote anything in this field.

But hey, it’s NaNoWriMo! As long as I get a draft written by 30 November, I’ll have as long as I want to edit it into something readable :p

So if you fancy reading some dodgy fiction, the prologue has been posted to Little Bit of Red. Chapter One will follow once I’ve given it a quick edit. After that, things will hopefully become a little easier :) 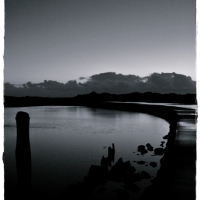