A film or television program that has changed me. This is the top for today’s installment of the challenge and trying to pick one from the many is proving somewhat difficult, so I will choose three of them.

I have already mentioned Doctor Who, Chuck and One Tree Hill as being three television series that have given me hope when all felt lost. Skins, meanwhile, has also been previously plauded for saving my life in 2009. Thus each of these have been automatically excluded from being mentioned here.

Granted, not something many people would think of, but this show was a necessity for me growing up. My wall was plastered with posters of Kylie and Jason and whenever I got my latest copy of Smash Hits I prayed for a big fold out poster of the Blakeney twins. Alas, this desire to fulfil my burgeoning ‘urges’ failed to materialise and just as I’ve carried my affection for this show over the years, I’ve continued to hope that one day I will discover such a poster. 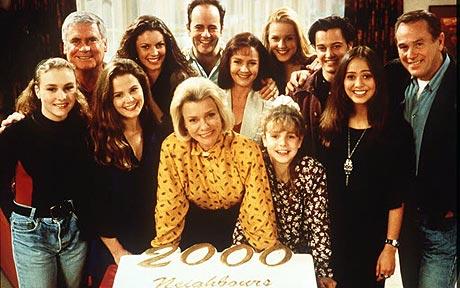 The Cradle Will Rock

My first viewing of this tremendous film came when I was in Canada.

The friend I was staying with suggested a movie night and we drove to the local Blockbuster to hire it. I’d never heard of the film, written and directed by the wonderful Tim Robbins, but boy had I heard of the cast: John Cusack, John Tuturro, Bill Murary, Joan Cusack, Hank Azaria, Susan Sarandon, Vanessa Redgrave, Emily Watson, Angus McFadyen, Jack Black.

This film, more than any other, changed my perception on the movie industry. I have never – and I mean never – understood how such a brilliant film could be so unknown. Even with my love of all the actors it featured and reading two movie magazines monthly (at the time) I had never heard of it.

So after being so captivated by my viewing of it, I praised it to all I could. Yet all of these people – film students, people who claim to be highly knowledgable in the world of film, random strangers – just looked at me blankly.

It made me realise that even the greatest films with the most talented of casts can be reduced to the realm of obscurity courtesy of a few negative reviews and poor box office performance.

To illustrate what I mean, look at Australia, where this film didn’t receive a cinema release. Nine years after it was released it received a TV premiere and then…nothing. You can’t even find it in your local DVD store as it never scored a release!

After a lifetime of watching the classics, the comtemporary, the independent and the just plain appalling a low key film is released that changes my perception of what film can achieve and re-affirms my belief in the world.

There are no stereotypes over what a relationship should be, there is no Prince Charming on a white stallion, the “one” is often a flawed individual rather than the personification of perfection and there is no ‘normal’.

And finally, after nearly a quarter of a decade of inspid stereotype and hope, this film made me finally believe the film industry could write complex, real, female characters.

There are many others that have changed me, and perhaps I’ll share some more at a later time. As for now, has anythinig from the world of film and television changed your world?